A strength of Wild Spy’s is taking ideas for animal monitoring and management technology and turning them into reality. Over the years, we’ve developed many prototypes and proof-of-concepts for various projects. Here are a few interesting ones.

Nicknamed by our roving collaborator, Dr Neil Jordan, Radio-Operated Alerting and Repelling Systems (ROARS) take our WIDs to the next level. WID data loggers are transformed into devices of repelling animals from areas or resources such as livestock, using various aversive stimuli such as very loud sounds and bright, strobing lights. WID tagged animals that come into proximity of a ROARS trigger multiple stimuli. The aversive stimuli are varied and presented randomly to help reduce the likelihood of habituation. Many hundreds of user-defined sound files can be stored, allowing for comprehensive testing of all the sounds that may or may not be aversive to the target species. Light strobes can also be randomised. And, of course, the WID data logger at the heart of the system records the detection of tagged individuals, battery life, etc. and can automatically send data via satellite to provide up-to-date information of how the system is performing. 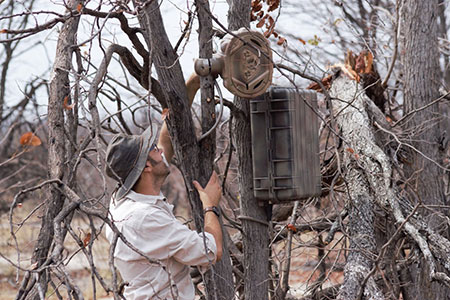 Dr Neil Jordan deploying a prototype ROAR system in an experiment to see if aversive sounds can protect livestock from lions in Botswana, Africa

Many modern camera traps/trail cameras do a great job of collecting useful images for scientific experiments. However, most aren’t that great when it comes to image quality, especially when shooting video. Typically such cameras use a low quality CCD sensor and "upscale" images via interpolation. This makes them poorly suited for modern documentary and film making when HD is considered a minimum requirement, and UHD (4K) is preferable. When Mio and Moritz Katz from Japan’s national broadcaster, NHK, approached Wild Spy looking for help with filming a dingo documentary on K’gari (Fraser Island), we knew we had to up the ante. We took the ScoutGuard MG983G-30M trail camera and mated it with a GoPro Hero 5 via the motion sensor to create the "MoPro" - the GoPro Motion Camera. The result was stunning UHD footage automatically captured at sensitive sites such as dingo dens. 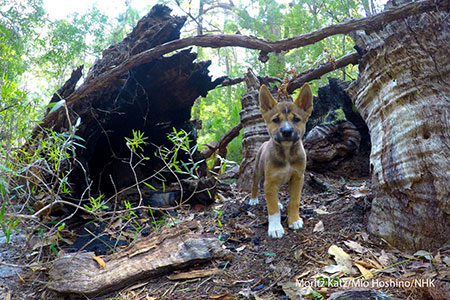 A frame grab from a MoPro (GoPro motion camera) of a dingo pup ("White Sock") at a den site on K’gari (Fraser Island), Queensland

We have a lot of clients that need various animal-borne devices to operate automatically on collars, such as GPS, data transmitters, VHF transmitters, drop-offs, and cameras to name a few. Most devices have to activate and deactivate exactly when needed, but also usually at different times from one another. How to control multiple devices on collars automatically? Introducing Wild Spy’s open-source timer (OST). It allows up to four independent devices to be precisely controlled all from a relatively small and inexpensive PCB. Just hook up your devices, use our free custom software to program in the times you want your devices to operate (or not), and off you go. At the heart of the board sits the well regarded DS3232SN real-time clock (RTC), which has a very low drift (around 60 seconds a year at 0-40°C) coupled with an ARM Cortex ATSAMD21E16B microcontroller. On-board regulators allow for various voltage and current inputs and outputs straight out of the box, but if this isn’t flexible enough simple add-on daughter boards can be added to increase voltage and current flexibility. We currently have test units running in a prototype GPS satellite collar for studying binturong, AKA "bearcats" (Arctictis binturong), with an OST controlling the GPS, VHF, and drop-off. We are also now working on a version that allows for external sensors, such as accelerometers and light-dependent resistors, to provide more information about when to switch devices on and off, making for even smarter and more useful animal-borne systems.

Every year hundreds of koalas die on south-east Queensland roads. Mitigation strategies such as fencing and overpass/underpass infrastructure can be cost prohibitive and logistically challenging to apply at the scale of the problem. Wild Spy proposed a trial of WID-activated signs that would alert drivers to the imminent possibility of a WID-tagged koala crossing a road. The aim of the system is to reduce koala mortality and increase public safety.